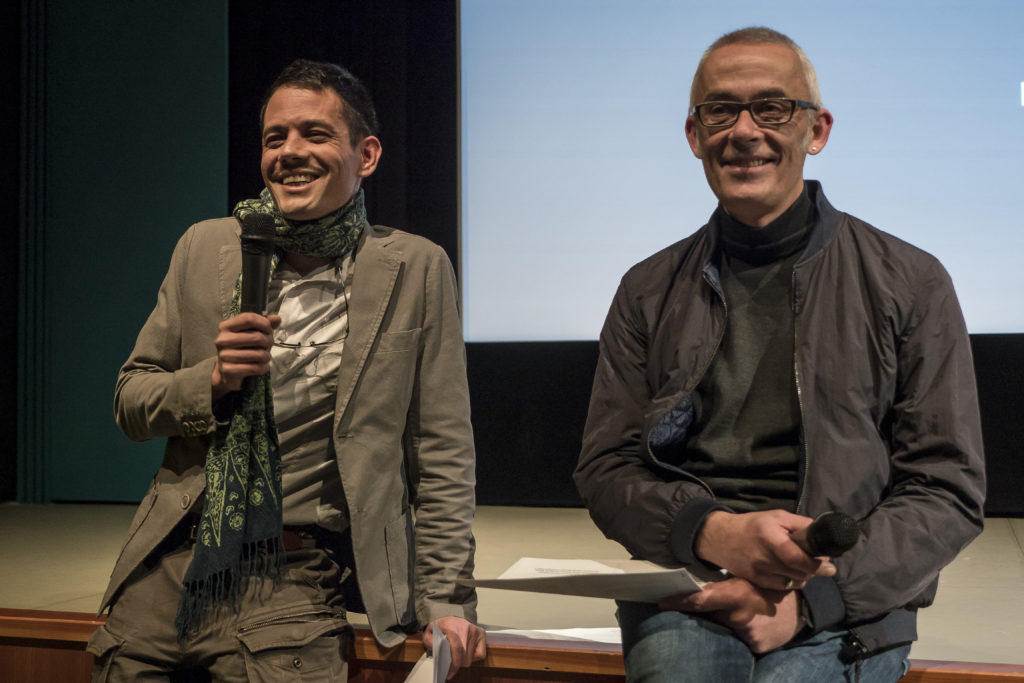 The Viennese film director, producer and editor Ascan Breuer (* 1975, Hamburg) is the initiator and director of UNDOX. In 2015 he was honored as an “Outstanding Artist” for his innovative documentary work. He is the founder of the “Dokumentarisches Labor”, which for more than a decade has dealt practically and theoretically with innovative methods in documentary film. In this area he teaches at universities and art colleges nationally and internationally. His award-winning films include, among others, those of the “Trilogi Jawa” (Javanese Trilogy) and “Forst”. He is currently working as a filmmaker on a multimedia production called „Starless in Stalingrad”.

Vrääth Öhner is a film, media and cultural scientist. Since its foundation he is artistic director of UNDOX in partnership with Ascan Breuer. From 2011 to 2017 he was a University Assistant (PostDoc) at the Institute of Theater, Film and Media Studies at the University of Vienna, since 2018 he is Senior Scientist at the Ludwig Boltzmann Institute for History and Society. His research interests include the theory, aesthetics and history of (documentary) film and television as well as of media and popular culture. His most recent publications include „Sichtbarmachen. Politiken des Dokumentarfilms“ (edited with Elisabeth Büttner and Lena Stölzl), Berlin 2017.

Amina Handke is an artist, author and curator. Since 2018 she is part of the artistic directory board of UNDOX. She mainly works with video, photography and performative methods, also with objects, drawing and text. She is and was active in manifold artistic and cultural fields: TV, film and multimedia, theater, performance, music and youth work. Her artistic focus lies on the reflection of social norms and complex, contradictory constructions of identities and authenticity. – more info

Armin Kirchner is – alongside Ascan Breuer – the co-founder and CEO of UNDOX. He completed his Master’s Degree in Theater, Film and Media Theory focusing his research on „New Austrian Film”. Most recently, he contributed to the anthology “Refuge – Migration – Theater” and was involved in film projects such as “What the Wind Took Away.”

Anna Katarzyna Kolkowska studies European Ethnology, Cultural and Social Anthropology and Scandinavian Studies at the University of Vienna and is undergoing a professional acting training at the Schauspielschule Wien (Vienna School of Acting). As an actress, she was involved in an English-speaking theater project “Bridgin ‘Drama” in 2012/2013 (Bratislava, Slovakia). The same year she co-wrote the screenplay for the short film “Memory”, which she directed by herself in Berlin. In 2015 she shot her first documentary “Breaking Distances” in Vienna. Gender, identity(s), prejudices and personal coping mechanisms with them are the main topics of her projects. She is currently working on two documentary film projects and is starring in the German-speaking adaptation of the Polish classic “Yvonne, the Burgundian Princess”, which will be performed again in Vienna this fall and was shown at this year’s International Gombrowicz Festival in Poland.

Maria Lisa Pichler was born in 1991 in Styria, Austria. Following her studies of Political Science in Vienna and Mexico City she started studying at the Academy of Fine Arts of Vienna in 2015. Since 2017 she studies at the department of Art and Film with Thomas Heise. At the moment she is involved in several documentary projects (camera and sound design). Her recent short documentary „Staub / Dust“ was shown in april 2018 at the Crossing Europe film festival in Linz, Upper Austria.

Tatjana Hoser is currently living and working in Vienna and Prishtina. She works as a film curator for Lumbardhi, an independent cultural institution and cinema based in Prizren, and as a researcher for the London based feminist film journal Another Gaze. She has been working at the Austrian Film Museum’s film collection and holds an MA in Theatre, Film and Media Studies, focusing on film and media as well as gender studies. She is studying at the Academy of Fine Arts in Vienna with a current research focus on formations and politics of archiving, ephemeral film, as well as theory and aesthetics of documentary film.