Islam Chipsy from Egypt and Aïsha Devi from Switzerland are two musicians whose main
strength lies in their live performances, informed by a non-repetitive unique style that
YouTube or SoundCloud will never be able to reproduce.
One Plus One Makes a Pharaoh’s Chocolate Cake documents the process of a week of
meetings between Aïsha and Chipsy in Cairo, Egypt where they were asked to produce a
collaborative music track. Shot on a VHS camera, the experimental, performative project was
conceived to be full of improvisation, with no fear of failure from either the filmmakers or the
musicians, and no pressure to produce a final product, be that a finished piece of music or a
documentary film.
Cultural exchange is not the process of “Here’s my culture, I’ll have some of yours” that we
sometimes think it is. Rather, it is something that should be mutual and deeply based on
commonality and equality. One Plus One Makes a Pharaoh’s Chocolate Cake is an inquiry
into the difficulties of artistic collaboration and questions whether anything is ever actually
exchanged within the so-called cultural exchange.

Marouan Omara, a documentary filmmaker who works and lives in Egypt. He studied
Photography at Applied Arts Helwan University, Egypt. He has a Diploma in Film Directing
from The Academy of Cinema Arts And Technology, Egypt. He currently works as an
adjunct professor for film production at the American University in Cairo. His films have a
dreamlike notion, overlapping fiction and reality by it’s direct response to the surrounding and
closeness to everyday experiences with constantly moving on the boundary between
documentary and other films’ formats. All Omara’s films are based on collaborations with
Egyptian or international filmmakers/artists. 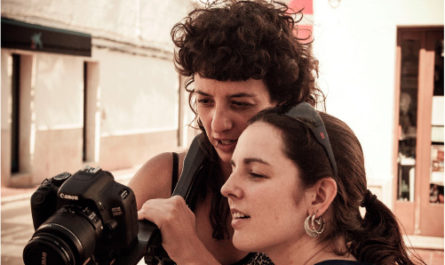