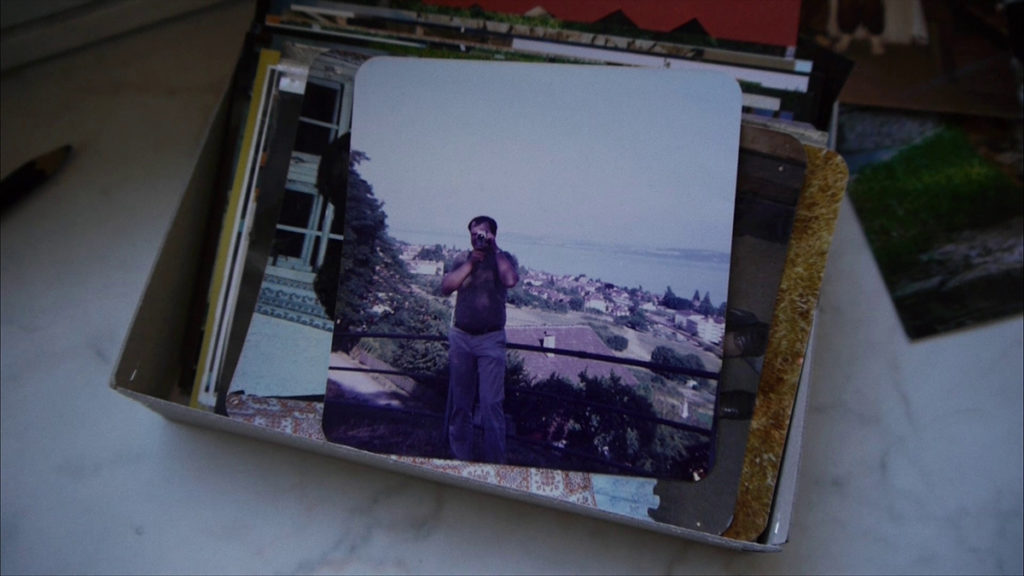 In cautious takes, Michaela Taschek explores the kitchen at her parents´ house; films the breakfast table, then the hallway, and finally, the bathroom where her father died entirely unexpectedly of cardiac arrest in 2014. With a calm voice, the filmmaker explains from off-screen, a baffling story that neither begins nor ends with her father´s death: that morning in June was, after all, not the day that her father disappeared. She is utterly convinced that Erich was replaced by a doppelgänger already more than twenty years early. Taschek looks back fondly to a time in which her father Erich was still entirely himself: she films old photo albums, weaves in fragments of Super-8 movies from the family stock, and recalls a sociable and agile man who celebrated life before he was forced to give way to a taciturn, eccentric doppelgänger. In her essay-like search movement, the filmmaker lets the photos from back then become reversible figures: a pale fog of blurriness surrounds the in-part blissful snapshots, which the filmmaker questions once again in her documentary fiction, in order to identify the dodges of a transformation and track down the window of time in the 1980s in which the father — at first, unnoticed by the family — must have been replaced by an unapproachable duplicate. With Doppelganger, Michaela Taschek draws a delicate portrait along the memories of the two men, and reveals a contemplative cinematic space in which facets of saying goodbye condense in an unusual form of viewing. (Jana Koch, translation: Lisa Rosenblatt)

Vienna International Shorts-Jury “Best Newcomer 2018”:
„Drawing from personal archives, the film combines a gently lyrical narration with autobiographical and reflexive documentary practices. Fondly unearthed details, fanciful anecdotes and memories—those slippery, unreliable sources fill the biography of a man whose seemingly ordinary life of marriage, raising children, and building a house was constructed over a deep well of melancholia. The many mysteries of his life have been lovingly shaped by the filmmaker into a story about her father, her family, and herself. The Best Newcomer Award goes to Doppelganger by Michaela Taschek.“

Ascan Breuer:
“I count Doppelganger to a very special genre, called “magical documentary,” a genre of documentaries that – just as the literature of “Magical Realism”- seeks to awaken reality, its hard facts and dubious appearances into life using a “magic speech”. Nothing here is convincingly sober, strictly regulated by language or subjected to conformities. It’s a sphere of wildness, monstrosity and audacity.